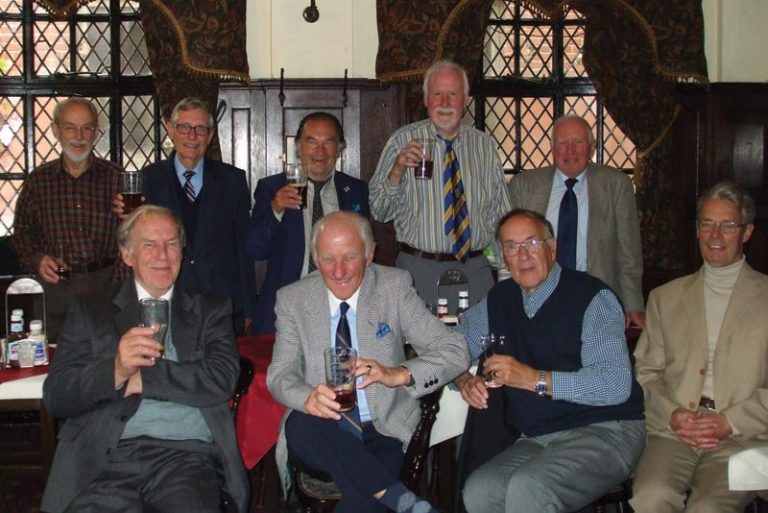 The 1951 intake enjoyed yet another Reunion, at the Cheshire Cheese, Little Essex Street, off Fleet Street/The Strand.

There was general interest in a collection of postcards circulated, depicting scenes of Hornsey, from the 1900's, particularly of the Priory Road/Park Avenue North area. A toast was later drunk to “absent friends”, with particular reference to Mike Bonner, who died recently. Mike was a published author and one of his novels was circulated, containing some biographical details. He was remembered with much affection: thumbing through Mike's novel Dave Hall –  a fellow member of the 1951 intake's football team, noticed that Mike had adopted “Belasco” as the name of one of the novel's villains – this also being the name of one of his pals in our football team 60 years back  (one we have not so far  managed to track down incidentally). Although short on numbers this year, this was in some ways as advantage,  certainly to those of us whose hearing is not quite what it was, as conversations were easily heard from one end of the table to the other and we had peace and quiet as we had the top floor of the pub to ourselves most of the time. Suffice to say that  some 4 hours or so went by somewhat rapidly – and a  good time was had by all..

Steve Ling had hoped to attend but was not well enough due to a kidney complaint and Anthony Cirsch was also unable to attend due to health reasons. Also Roy King has now become a full-time carer, due to his wife's illness.

Of the others, Alan Canham  was winner of the  “Cherriman” award from the Amateur Swimming Association and as a result was  giving a presentation on the teaching and coaching of swimming; John Partridge was up in Manchester; John Taylor was visiting family in Australia;  Bill Houlsdsworth was attending a Chapter meeting; Brian Whitehouse was also officiating at a Chapter meeting and apologies were also received from Peter Jollie, Michael Davis, Rodney Cooper and Alan Marshall.

Details of all forthcoming reunions are listed below:

The pub does not open until 12.00, so those arriving early can visit the graves of famous people in the Bunhill Fields Burial Ground. It is a Fuller’s pub so it has: ESB, London Pride, Seafarers and Oliver’s Island with a guest ale of Hophead from the Dark Star brewery which Fullers had recently acquired. The menu should fit all tastes, whether you want a snack or main course and dessert, with a good choice for everyone. Please contact Tony Moffat on tnymfft@aol.com.

End of October 2018? Venue to be determined

A Reunion for Old Boys who attended the school between 1958 and 1965 is being organised towards the end of October 2018, at lunchtime, in Hornsey/Crouch End. Anyone interested in attending is invited to contact John Ward at johnclarkeward@msn.com for further details. Guidance We can offer assistance in organising a reunion, please contact Peter Thomas who will be happy to help.