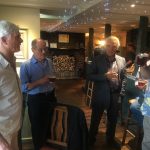 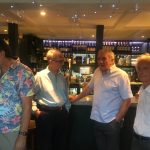 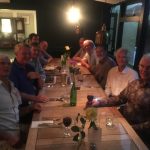 Simon Westbrook, who now lives in California, but visits the UK regularly suggested the reunion, which has become an annual event.over the last three years. Simon Kusseff was the organiser!

News of other absent Old Stationers from our class:

Condolences were expressed to Eric Dore and Bob Douse. Both have recently lost their wives. Eric has moved to Margate and following an operation, has had a mini stroke, but is now recovering.

24 other OSA were contacted but unable to attend for various reasons: Jim Halliday and Martin Palmer were on holiday in Canada.

Still you are Stationers, FAR AS YOU ROAM.

Almost 20% of our class 1960 now live overseas. In addition to those named above:

We raised a glass to absent Friends.

Many absentees indicated an interest in attending the next reunion There were suggestions for a future rendezvous in a London pub for ease of access and some absentees suggested it be a lunch time meeting.