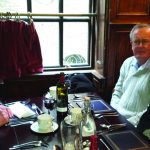 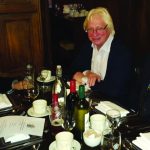 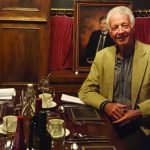 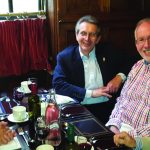 For the 20 who attended the reunion last week, I think it would be fair to say we had a great time. There were one or two faces that had not been seen for somewhere between 30 and 45 years, and the prize for the furthest  distance covered went to Roger Lewis who flew in from the French/Swiss border. John Leeming joined us and received an accolade in the memory documents that had been received by Stephen Jeffreys as one of the most influential and best remembered  teachers we ever had. (By the way, John admitted to being 8 years older than us!) . It was also good to hear from John Rowlands, the third member of our year to be President of the Old Stationers' Association.   We stood and raised our glasses to those who could not come to the event and included in the toast those who are no longer with us. Needless to say, we ended with one verse of the School Song.

There was even talk about another reunion in 2018 to celebrate 50 years since many of us left  the school. We will need a volunteer to lead the organisation of this event as I am retiring from this role. Any offers?

The attached photo will be sent to the Editor of the OSA Magazine for inclusion in the next issue.

So, hope to see everyone at the OSA Annual Dinner on March 24th when John Rowlands will be in the chair. In the meantime, do keep sending in your memory sheets to Stephen Jeffreys. Those that have been received in phase one are very amusing and so evocative of our era at the school.

My very best wishes to all for Christmas and the New Year.

Details of all forthcoming reunions are listed below:

The pub does not open until 12.00, so those arriving early can visit the graves of famous people in the Bunhill Fields Burial Ground. It is a Fuller’s pub so it has: ESB, London Pride, Seafarers and Oliver’s Island with a guest ale of Hophead from the Dark Star brewery which Fullers had recently acquired. The menu should fit all tastes, whether you want a snack or main course and dessert, with a good choice for everyone. Please contact Tony Moffat on tnymfft@aol.com.

End of October 2018? Venue to be determined

A Reunion for Old Boys who attended the school between 1958 and 1965 is being organised towards the end of October 2018, at lunchtime, in Hornsey/Crouch End. Anyone interested in attending is invited to contact John Ward at johnclarkeward@msn.com for further details. Guidance We can offer assistance in organising a reunion, please contact Peter Thomas who will be happy to help.