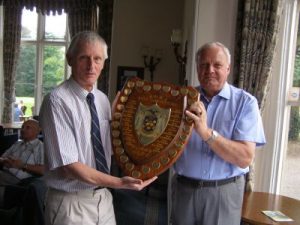 Roger Engledow (Pictured with Peter Bonner) beat off stiff competition from Dave Sheath and Alan Hudson to win the The Old Stationers Golf Society Shield at Pinner Hill on September 17th 2008. The trophy is awarded to the member with the best combined total from two out of three fixtures. 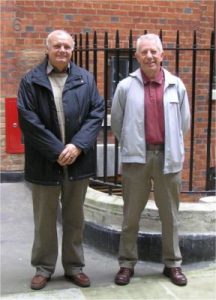 Malcolm Wakefield, in London visiting freinds, and unable to attend at Stationers' Hall on the 19th July 2008, decided to visit Bolt Court to see the site of the plaque to be erected on the original site of the school - and was just in time to meet with Peter Bonner (left) and Tony Hemmings (right) who were on the same mission in connection with the dummy plaque to be erected the next day. The final version of the plaque will be erected later in the year. 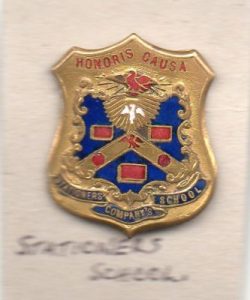 Not really roaming, but this badge has obviously roamed! Roy Simmons bought it at a badge auction, and wondered what this celebrates. Note the wording "Honoris causa" - can anyone throw any light on this? My prefect's badge is similar, but without this wording. 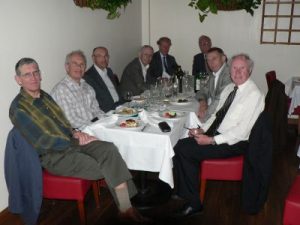 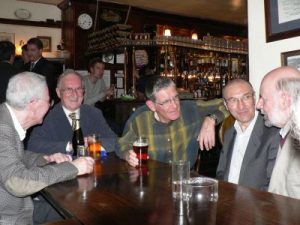 John Prior sent me these pictures of the fourth reunion of those who left the school in 1957, which took place in London on 2nd June 2008. Together with John were Derek Stevens, Ian Mackenzie, James Ellis, Richard Hayes, Robin Cooper, Ivan Huke, Eric Webb & Michael Pollard. 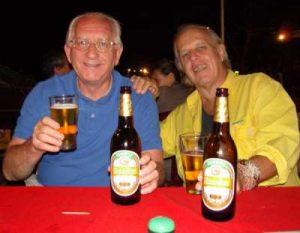 Keith Fielder and Anthony Mann roaming again this time on the bank of the Mekong in Vientiane, capital of Laos - I am pleased to see that they are upholding an Old Stationers' tradition in the form of bottles - perhaps, this time, they can be shamed into joining the Old Stationers! 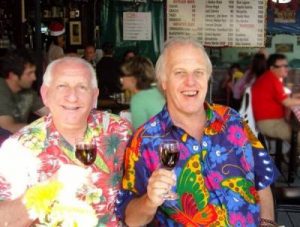 Dear Tony: For the 'Roaming' page please find attached a picture of Keith Fielder reunited with Anthony Mann in Chiang Mai, Northern Thailand on Christmas Day 2007. (Last year's reunion was in Hanoi, Vietnam). Still we are Stationers far as we roam!! All the Best for the New Year. 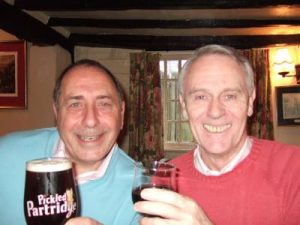 Keith Fielder and Tony Mann, with whom Pierre and I are in fairly regular contact, suggested that I email the attached. Though I have known Tony Mann for just about 60 years, Pierre Essaye (the guy sporting the identifying nick-name logo on his glass in the pic) and I have remained firm friends also for nearly as long! We have, in past years been regular biking companions with others in a group and have suffered on tandems too with our wives as "stokers", (name for the back seat driver of a tandem). We have met up regularly also for holidays and theatre outings, together or in a crowd. We currently plan a golf holiday with a couple of other guys and their partners too. Life ain't all that bad in retirement! Jim Hayman 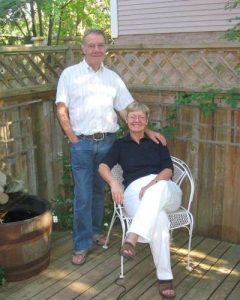 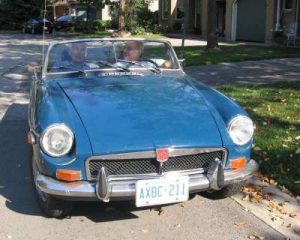 Les Humphreys writes
I drove to Burlington on a beautiful September day for a reunion with OS John Peacock after a break of 45 years. We motored down from his home on Lakeshore to Burlington Square, in his MGB, where we enjoyed reminiscing over a couple of pints in the sunshine. John met his wife, Patti, while she was at the Hornsey Art School. While still in England, they enjoyed good times in the sixties at that favourite haunt of many other OS, the John Baird in Muswell Hill. Before I left, Patti took a picture of the two of us in the MGB, a contemporary match for the B&W. taken in '59. 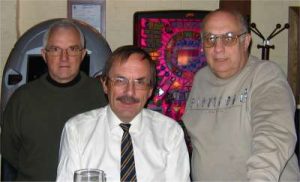 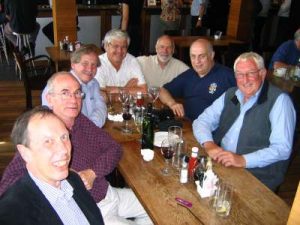 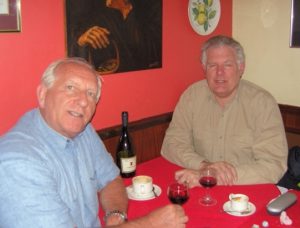 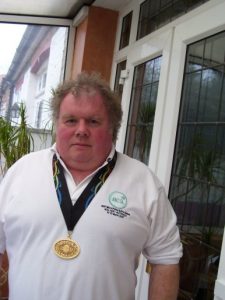 Peter Jarvis sent me these pictures of Jim Smith and the gold medal that he won at the Police and Fire World Games in Adelaide; he won the award for playing squash for the over 50s - against representatives from all over the world. Well done Jim! 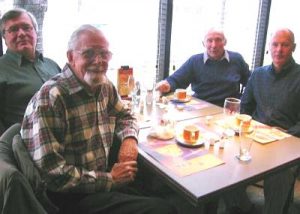 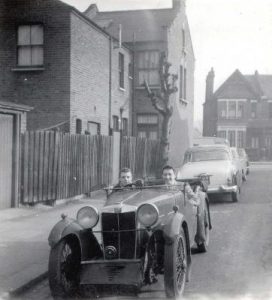 Pictures from Les Humphreys in Canada - left, a gathering in Ottawa (l to r) John Bathurst, Richard Osborne, Les Humphreys and Art Morewood at the St Hubert in Gatinau, and right a picture of Les with John Peacock in times past! 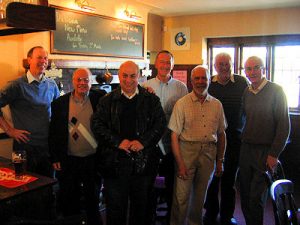 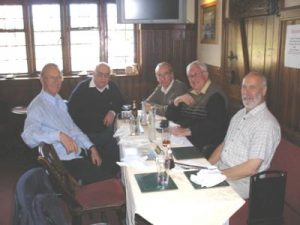 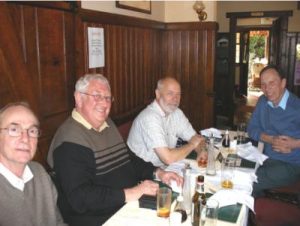 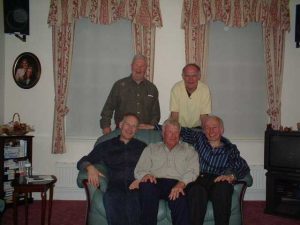 Class of '57 reunion in April 2004. Top left: Dave Deane next to Chris Langford. Seated: from left: Chris Wilkins, Jim Ridding and Gerry Metcalf. The first time Jim had been back in the UK for 35 years - and he had to go and see Spurs at White Hart Lane.... 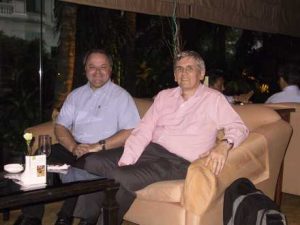 Peter Griffin (left) and Adrian Hare from the 1965 intake met at Kuala Lumpur in March 2001. 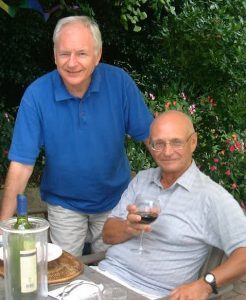 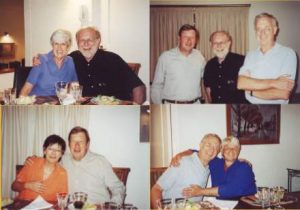 Ian Snelling met with Mike Johns and Charlie Cruden at his place in South Africa in 2002; Charlie with Annie Snelling, Mike with Lesley Cruden, and Ian with Sheila Weatherley. No comments about wife swapping please... 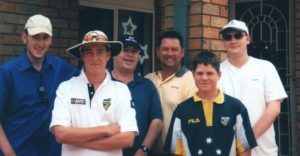 Alan Hudson roamed to the Antipodes to meet Ray Draper - and learned of another Old Stationer while he was there - click on the picture for details. 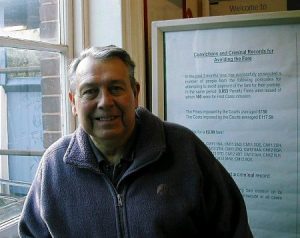 Les Humphreys was over from Ontario, and met with Nigel (Nig) Wade at Billericay. Les took this picture of Nig at the station just before they parted - and he says that the Nig did have a ticket - whatever it says on the poster behind him! 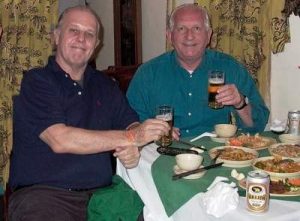 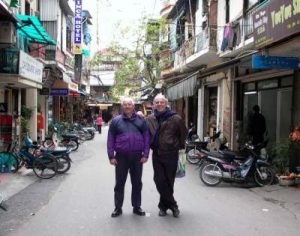 Keith Fielder writes: Anthony Mann and Keith Fielder (1953-1959) reunited in Hanoi, Vietnam in March 2006. Previous reunions had been held in London and Hong Kong. Ant was working on Urban Planning for the Hanoi Peoples' Commission and Keith was on a return visit that took in Shanghai and Hong Kong as well as North Vietnam. After a few excellent Vietnamese beers and an update on the Gunners a chorus of the school song rang out in Hanoi. Still you are Stationers far as you roam! 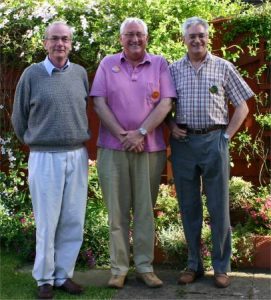 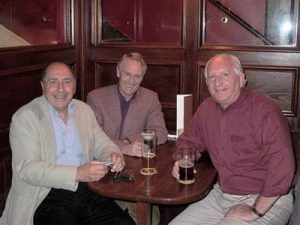 A small reunion between Keith Fielder, Pierre Essaye and Jim Hayman (1953-1959 approx.) held in the "Ship and Shovell" pub at Charing Cross on 17th. October 2006. All supporters of Arsenal, incidentally.